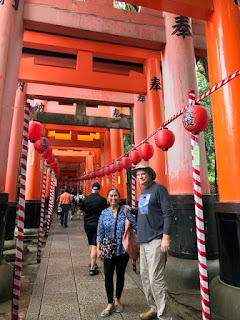 
WHEN THE RAINBOW GODDESS WEPT (https://ceciliabrainard.com/book/when-the-rainbow-goddess-wept/) is the story of the coming of age of a young girl in the Philippines during World War Two. The internationally acclaimed book is published in the US by the University of Michigan Pres, and in the Philippines by the University of Santo Tomas Publishing House.

Her visit to Japan prompts her to consider the events of World War Two in the Pacific. She starts her travel article as follows:

"My Filipino friends have raved about their trips to Japan. Availing of Philippine Airlines’ or Cebu Pacific’s discounted fares, they use Osaka as their base from which to visit other parts of the country. Even though they assured me that Japan is tourist-friendly, I was never tempted to visit it until my husband declared he wanted to go there. Recently he booked a nine-day tour starting in Osaka, on to Koyasan, Hiroshima, Kyoto, Hakone, and ending in Tokyo.

I went, somewhat reluctantly. My parents had been in the guerrilla movement in the Philippines during World War II and had told me countless stories of Japanese atrocities and the sufferings of the Filipinos during that war. In fact, my first novel, When the Rainbow Goddess Wept, integrates many of my parents’ stories of survival in Mindanao. (please continue reading in Positively Filipino) 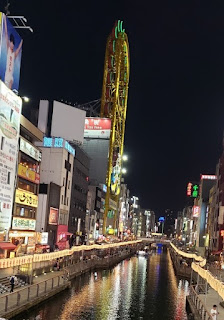 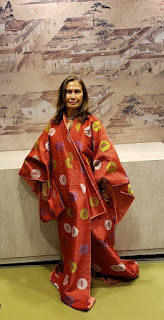 Cecilia pretending she is Lady Kaeda at Hiroshima Castle