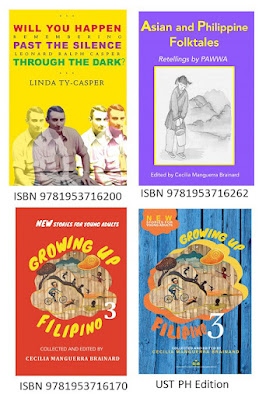 First on the list is Linda Ty-Casper’s Will You Happen, Past The Silence, Through The Dark?: Remembering Leonard Ralph Casper, a book which she calls the Memoir that her husband Leonard Ralph Casper did not get to write. Born in Fond du Lac Wisconsin in 1923, Leonard Casper had a full life as a writer, an academic, a literary critic until he passed away in 2018.

In this book, Linda Ty-Casper collects the letters to and from Leonard Casper, letters which reflect who he was to many friends, high school classmates, teachers and professors, colleagues in the Universities of Rhode Island, Ateneo University of Manila, University of the Philippines and Wisconsin, from editors of Southwest Review who encouraged Len to send stories from the European front during World War II; from Robert Penn Warren starting with his first letter of inquiry (two pages) when he began on his dissertation at the University of Wisconsin, the dissertation becoming the first book on Warren, which critics said showed the way for later books on the Southern writers. There are letters from Filipino writers Len grew to know as friends from years of teaching in the Philippines.

The book has been praised by Author/Editor Joel Pablo Salud who reviewed it, saying: “Will You Happen, Past the Silence, Through the Dark: Remembering Leonard Ralph Casper is a treasure trove of charms and jewels for those like me who find Leonard Casper a bit of a cryptic, enigmatic figure. Linda Ty-Casper has done a great service by shedding light    on Len’s memory, allowing us a voyeur’s look into a life dedicated to the magic and unease found in letters.

“I am sure this book will remain relevant for decades to come.”

The next PALH release is Growing Up Filipino 3: New Stories for Young Adults, which collects 25 short stories by Filipino authors in the US and the Philippines about what it means to be young and Filipino. The stories explore the universal themes of coming-of-age, love, angst, family, relationships, and other young adult issues. The stories reveal Filipino and Filipino American culture, mores, history, society, politics, and other nuances. For instance, Filipino respect for their elders, extended families, religious practices, funereal rites, love for folklore are apparent in the stories.

The University of Santo Tomas Publishing House edition of this book will be released in 2022 (distributors are Lazada and Shopee in the Philippines).

This small group of Filipina writers in America had published these stories in two books that have been out-of-print for many years. This collection includes 25 stories from places such as Laos, Japan, Korea, Sumatra, Vietnam, China, Bali, Indonesia, India, and the Philippines. The book's target audience is 9 and older.